– Volume, however, remains muted compared to prior sessions. 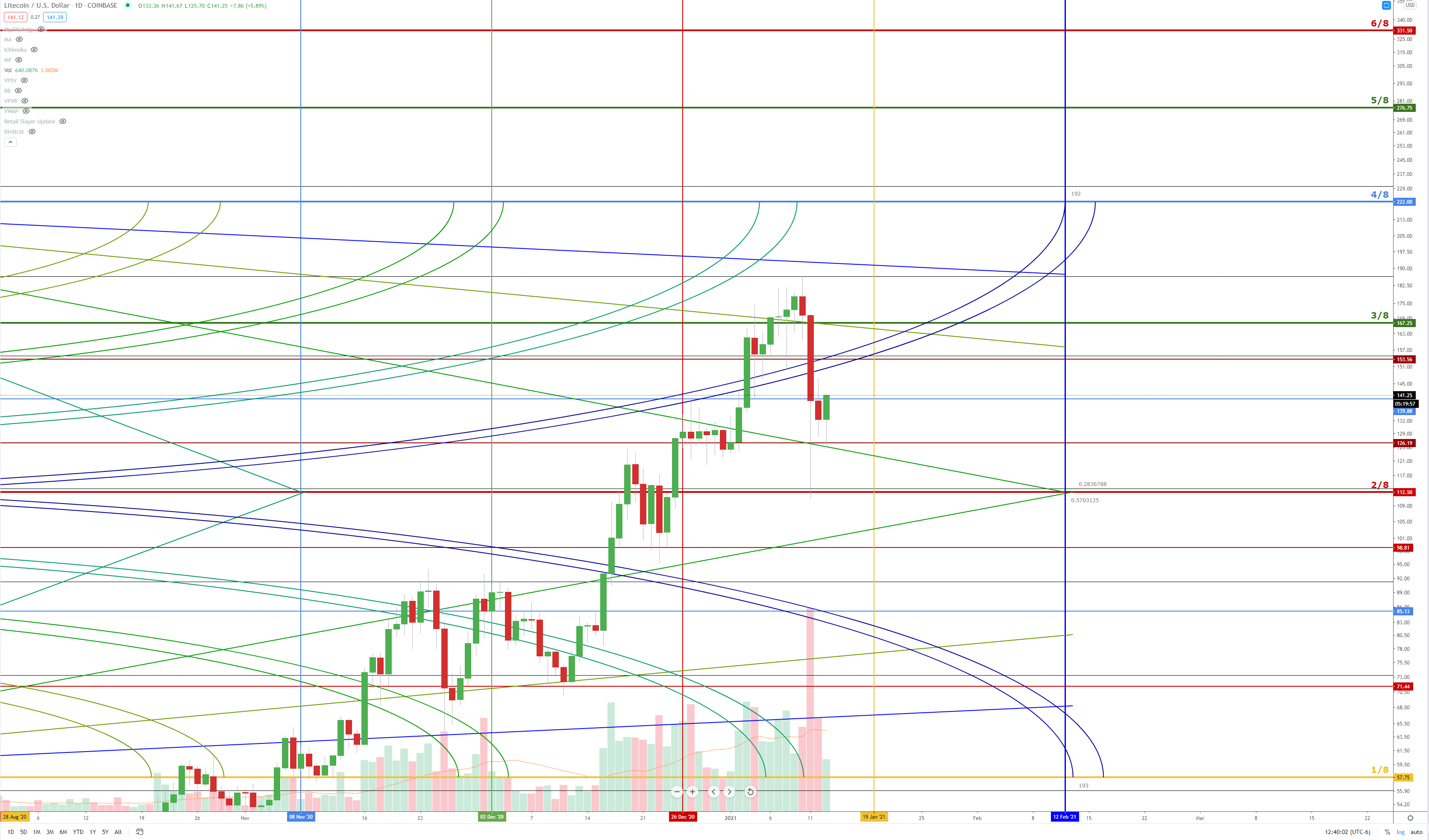 Above: Litecoin needs to remain above 139.88

Litecoin’s daily chart above shows some dramatic price action over the last three trading days. Monday saw Litecoin experience the largest daily traded volume (on Coinbase) since December 11th, 2017. Litecoin lost as much as -34.77% of its value at one point during Monday’s trading before settling for a -18.09% loss. Then, yesterday, bulls and bears had some difficulty figuring out where Litecoin wanted to go. Litecoin traded and closed lower for the day, but remained well off the lows made on Monday. Looking at today’s price action we see a much more directional and convincing move. Traders initially pushed Litecoin lower with a -11.27% loss but then bulls stepped in and retraced the entirety of that bearish momentum and have proceeded to gain +6.15% on the day. Anyone who was short between the -8% and -11% range are no doubt feeling the pinch and pressure of this intraday rally.

On the technical analysis side of the trading, there have been some key areas and levels of support. Notice the current daily wick formed on two key levels: the green diagonal line and the red horizontal line. The red horizontal line is the 2/8th inner harmonic (not to be confused with the 2/8th Major Harmonic at 112.50). The 2/8th inner harmonic is a nature support level that behaves sort of like a magnet with the same pole, when a negative end of a magnet gets close to another negative, they push away. The price action currently supports the kind of behavior we should associate with the 2/8th inner harmonic. The second major line is the diagonal green line, which is the 45-degree angle in this current quadrant. The slope of the angle in any quadrant provides us with the overall ‘mood’ or ‘sentiment’ of that quadrant. In this quadrant’s case, because its sloping down, we expect to see prices have an easier time move lower than moving higher.

I do want to call your attention to the blue horizontal line that Litecoin is currently trading against. The blue horizontal line is the 4/8th inner harmonic. It is the most difficult level for Litecoin to cross between the 2/8 Major Harmonic (112.50 and the 3/8th Major Harmonic (167.24). At the time of writing this article, there is roughly five more hours until the daily candlestick closes, so a lot can change. But if Litecoin does close above the 4/8th inner harmonic, that is a good signal that it will resume its march to higher prices. But watch out for some strong resistance at 153.56 and again at 167.25. Once Litecoin breaks and holds above 167.25, it should be smooth sailing for a number of weeks. The major support level remains the 2/8th Major Harmonic at 112.50.

Save money on your currency transfers with TorFX, voted International Money Transfer Provider of the Year 2016, 2017 and 2018. Their goal is to connect clients with ultra competitive exchange rates and a uniquely dedicated service whether they choose to trade online or over the telephone.
Find out more here.