So, normally we have a good excuse when the BMJ Newsletter arrives later in the day, but I must admit that today, I was simply glued to the charts watching bitcoin toy with the psychological level of $12,000.

It’s not like there’s anything particularly historic about this level. Yeah, it’s been the roof for the last few months, but it’s not even certain whether a breakout above this particular price point would necessarily attract too many new buyers that weren’t already interested.

It’s not the same market as it was in 2017, where each new high would bring in a wave of new interest. The dynamic is quite different now.

It’s almost as if bitcoin is just sucking up all the value from the market as we watch the bitcoin dominance index bounce to it’s highest level since Aug. 2.

Not to discount what’s happening in the world of DeFi, as it’s extremely exciting, but DeFi can also be quite fickle. Alternative investors in this space often use the analogy of hopping from train to train, where the point of the game is to be in the engine and not the caboose.

Technical analysis no longer bears meaning when you’re seeing a new all-time high and the price can turn around at literally any point. The fundamentals basically consist of following influencers on social media to find out which project is about to be hyped next.

Bitcoin, on the other hand, is more of a train station. It’s a central station, if you will, on a great expanse of rapidly expanding railroad tracks.

Some of these may be pivotal in the future of finance and the web, and others may eventually be abandoned, forgotten, and destroyed.

The central station, however, doesn’t move. It gets busy or less busy depending on the hour, but if anybody wants to go anywhere on the crypto map, they’re more than likely to pass through at some point in the day.

Yes, it’s possible that one day that bitcoin will either require a major upgrade in order to stay relevant, but that day is still quite far off in my opinion.

At this point, no digital currency comes close to having the recognition that bitcoin has on the world stage. Certainly, ether is number two, but is hardly a solid store of value due to the high rate of inflation and lack of a hard cap on total supply.

In a world where government currency is literally free, my strong feeling is that hard assets that are strictly limited in supply are the very best way to retain value.

We’ve been saying this for months now, even though the market has been a bit cuckoo lately. At some point, we will very likely see a massive consolidation in the digital market and in my own mind, now is as good a time as any. 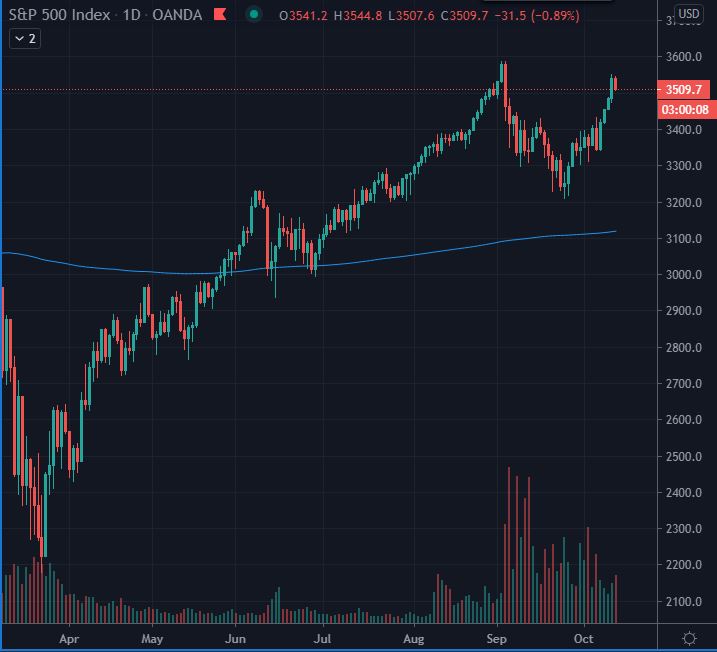 This is just the latest example of just how irrational investors are being right now. …

Well, to be fair, CNBC’s Jim Cramer is always a bit exuberant, but this headline really takes the cake. Today’s Department of Justice (DOJ) lawsuit against Google is an undoubtedly bearish event.

Yet, for some reason, the stock has risen. So, in true stock analyst fashion we now need to explain why, even if we don’t exactly know.

Cramer gives reasons like “the government can’t break up google,” or “breaking them up would actually increase the value of the components.” Neither statement is actually true, nor does it have any basis in sound logic.

The fact is that all areas of the U.S. government, on the left and on the right, are coming for big tech. Many politicians will score a lot of points with their constituents if they’re successful in taking these firms on, as well as being able to display their dominance in a world where corporate power is rapidly gaining over governmental power.

At any rate, this saga isn’t over, and it should probably not be lightheartedly dismissed, especially since so many are currently riding the big tech train.